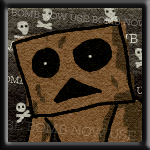 Bomb Sense: danbo's ability to know when to use a bomb.

I’m getting a little sick of games where you mostly get better by picking things off a menu.

I don’t want to single this game out – it’s simply playing around with a concept that has long dominated games, and a few other ideas at the same time – but that was mostly the thought in my head as I played 100th Black Market.

This side-game takes the cards concept from Unconnected Marketeers and truly unleashes it. A run is one stage, and each stage consists of multiple waves. Each wave ends with a shop where more cards can be purchased. UM might have had 7 cards in play at once at most, in this game it could be as high as 40. Cards directly upgrade the player, add to their shot, provide cooldown abilities, etc.

Bullet money, the currency for buying from such end-wave shops, is acquired through grazing or a tool called the “magic circle” – a small, positionable circle that handles a bit like the camera mechanic in Shoot the Bullet. The circle lasts for a moment, and slows bullets inside it while leeching money from them. It’s a scoring mechanic which can serve as a forward defense – a little reminescent of the shikigami in Guwange, where incorrect usage can create impossible situations. It’s an interesting and versatile tool, though perhaps extremely awkward to use in a tight spot.

There are a few boss spellcards which are more or less impossible1 to clear without the magic circle, and their presence is a little confusing. I wouldn’t mind if the game was fully built around using this tool at all times, but I don’t like a small handful of spellcards suddenly putting me in that version of the game.

There are eight stages, and the focus is on replayability. Each wave is randomly selected from a pool of pre-made fairy attack waves, and the boss is randomly selected from a pool too. No problem with the random selection of bosses, they’re fun, but the random selection of enemy waves is a huge problem – put as bluntly as I can put it, some of them are fun, and some of them really aren’t. Some are easy, some are hard. Some are so insanely lucrative that any player will finish with plenty of money, and others are sparse enough that you will literally ram yourself into enemies in the hope of grazing more than four bullets in the thirty seconds.

This doesn’t go well with the random per-wave-shops. As in UM, the cards populating the shop are selected randomly – and at first you are fully reliant on the shop to power up your anemic shot, which is sorely needed in the face of some incredibly tanky fairies. Marisa “⭐ I Ain’t Gotta Route Anything If Everything’s Already Toast ⭐” Kirisame has absolutely no business feeling this weak. It can certainly be frustrating to be presented with the proposition to buy Aya’s stupid smelly shoes (player movement speed increase) when the enemies are reliably bullying me into the bottom gutter!

Later stages throw two waves at you at the same time, which further confounds the balance. Some random combinations of waves can be quite fun, and others far less so. Waves can push you into the gutters only to be practically telefragged by a spawning enemy of a different wave. I don’t mean to throw disrespect at a series I love whole-heartedly, but stages are often not the strength of these games, and this is a bit of a step down.

However, with a certain predictability, the game eventually just hands over the power needed to overcome it. Grind for long enough – play enough of the early stages to unlock more cards, and you get the ability to equip more starting cards, giving you a lot more control over the game. Unlock Megumu’s space rice, and you are no longer dependant on the market for doling out shot power, and you can start properly controlling the small fry again. Unlock Psychokinesis, and you now have a fairly ironclad, short-cooldown defensive option for when things stack up badly. Clownpiece’s torch enhances both prior options with shorter cooldowns across the board. Tewi’s fake rabbit foot is a recession-beater, massively increasing the bullet graze radius for mere pennies on the dollar – more reasons to never use the magic circle again. Now, perhaps two thirds of the way into the game, we actually have a toolkit, and as such we barely have to play the game at all anymore. This inverted difficulty curve is becoming very familiar in games.

There is a fine line to tread with what I am going to call “menu power” – the world of loadouts, upgrades, cards and how they boost your capability. I think that when games present you with a few options and ask you what you like, the player is granted the opportunity for self-expression alongside a bit of problem solving. Two fine reasons to play video games! I play MarisaB in EoSD – an inconsistent, rather narrow shot type and a slightly chaotic speed, but one hell of a fucking bomb – and I think that tells you just a little about who I am2. At the same time, if I get bored of EoSD (never!), I can play a different shot type and turn my plans and routing completely on their head.

But when menu power runs amok, particularly intertwined with labyrinthine progression systems – the loadout stops being a means to traverse and further enjoy the game, and starts being the game in itself. As you play repetitive, imbalanced stages just to grind out your collection of cards, the bullets are not there to be enjoyed and dodged, but merely a means to get more cards.

I want to be nice to this series – I love it dearly. I think my next post will be about a completely genius game in the series.