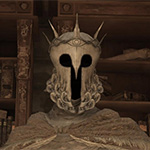 After an initial playthrough of this game, it produces what you might call a “phantom pain” to look back on it and consider what you spent most of your time doing.

FromSoft’s dodgeroll-em-up series became something considerably more sublime than a slow, stamina-bound version of Hit Guy With Sword1 via its level design. Each prior game funneled you unerringly through perilous environments and tight combat encounters – even as the game systems got more and more streamlined, the level design still shone quite well. The games never took a break from forcing you through danger – perching you over deadly falls from the word go, and unafraid to let an unwary player pull a lethal blender of enemies all at once – it is this “always on”2 pacing that gave the games their punishing and dangerous reputation, far more than any boss fights about big sad/mad men playing big sad/mad music.

Consider a perennial favourite of the series – the humble poison swamp, choked in poisonous mist, inhabited by poisonous oafs lugging jugs and clumps of poison muck back to their poison houses to feed their poisonous wife and children. This type of environment puts plenty of pressure on the player – the constant ticking of poison damage forcing them forwards, ideally to the pockets of dry earth outside of the filth before they run out of healing. But these pockets are no true safe place – here, dangerous enemies encroach, threatening both directly – poisonous strikes and bites taxing health resources all the more – and indirectly to push the player back into the muck to go fizzy and green/purple again.

Now consider the (multiple) poison swamps in Elden Ring. Only one of them is able to influence the player in any way – the others simply become a different floor texture and footstep sound, once atop your horse. A different texture that sprawls endlessly under the player as they try desperately to find the actual level design. The horse obviates the player from both environment and encounter3, feeling not too far removed from a “noclip” cheat that somehow landed itself inside the game. But of course, traversing the sheer scale of this land would be boring without a horse – but then again, scale isn’t a virtue in itself.

The open world is certainly beautiful and admirably coy about its true scale and secrets up until the very end, but it may be the worst thing to ever happen to this series – and previous games didn’t require this structure to achieve beautiful vistas, to achieve pacing, to delight the successful player with scale and exploration or to present a struggling player with something else to try.

Outside of this environment, the level design still rings true, squirreled away inside large setpieces commonly known with the vomit-inducing term “Legacy Dungeons”, as if soon deprecated. The smaller overworld dungeons, on the other hand, are the type of bite-sized and forgettable filler that this game structure rather cravenly demands. Such catacombs, caves and hero’s graves aren’t quite unplayable – even when this series is bad, it’s like pizza. Edible considering the alternatives, but no pizza was ever all that revelatory.

What criticism of this game exists seems to lie on over-difficult bosses, bad dungeon rewards and reused bosses. The first can be chalked up to the arms-race nature of keeping the game difficult enough to be interesting against a playerbase that has only got better and better at pressing the roll button, but for the other complaints I think it’s necessary to look skywards and ask why the game has to come up with so many dungeon rewards and bosses to begin with.