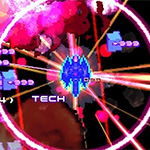 This is a huge, 16:9 vertizontal sloppy ice cream sundae of a game. STGs weren’t always tight, small-scale avenues of purist challenge – in their heyday, the arcade was where you went for visual dazzlement and sheer spectacle – and GRAND CROSS: ReNOVATION certainly remembers this. Every stage throws so much stuff at you – the camera zooms and pans, the sprites scale, legions of enemies battle and flank in the background. Roughly every five seconds a boss-class enemy heralds itself proclaiming that the world is not enough for it, and given the scale this game’s presentation puts across, it’s hard to disagree. The huge, bombastic soundtrack unifies with what’s on screen very well, only adding to the sheer wall of violence and chaos before you. What’s really interesting for me is that this presentation has its rough edges – there’s some awkward scaling, strange blurs and effects here and there, and yet such rough edges only add to the sheer visual volume – while making it look and feel all the more unique.

The basic game systems are also instantly compelling, and tickle a part of the genre that may seem forgotten at times. The game trusts you with a terrifyingly powerful weapon, the Sun Blade, and pushes almost all offense and defense almost directly onto it. This weapon is how you command the large amount of space the screen format demands via a simple left-right aim scheme1, and straight away it’s an invitation to all the fun scams a piercing laser lets you do. Skewer 10 enemies at once, slice it across the screen for a screen-clear, laser-battle whatever huge monstrosity lies in wait. The Blade isn’t all that’s on offer – it’s supplemented by a “basic” machinegun weapon (if such a term is appropriate for an upwards-pointing 10-degree cone of blue death), a 360-degree scatter shot for indecisive players, and an overdrive blade mode for when “the most powerful weapon in shmup history” just isn’t doing it for you.

This all-commanding weapon is tied to a rapidly-recharging health gauge. I’m less sure about this – such an extremely fluid health system makes you wonder what attacks you can afford to take on the chin and what you can’t, which is generally not something I find compelling in STGs. This system should result in a bit of give-and-take, desperate dodging between bursts of the laser, but the overall balancing is very much on the easy side. You tend to overwhelm almost everything, or neutralize even the more fearsome attacks giving yourself more than enough space to regen, incredibly quickly2. A few gimmicks might catch you out, but this is very much an easy clear, and an even-easier credit feed.

This balance isn’t exactly a bad thing though. Given the immensely OTT presentation of the game, it’s just as well that you’re not constantly picking your way through patterns – suddenly there would be a lot more problems of visual clarity and readability, and there are already a couple. As it stands, the game is simply about effectively managing a bunch of fun weapons and enjoying the tremendous space opera put before you. Being on the easier side need not mean “boring”. And more power to it – this is a great recommendation to people that don’t really play STGs, or are out of practice, or the kinds of people who bitterly joke that the genre should have been called the dodge-em-up.

And I don’t want to give the impression that this is a super-facile, basic game. There’s plenty going on under the hood if you want to go looking – the stages in theirselves deliver plenty of variety, an armoured vehicle of sorts appears at times to be an STG powerup that’s not simply “the way the game hamstrings you for dying”. The enemy formations are very dynamic and never deliver a dull moment. Though a weak spot is the scoring system – between cancelling enemy shots into cubes, a bit of footery gauge management and some boss bonuses, there isn’t really a unique identity or good feel to the scoring. But hey, if you want a rich and unique scoring system, there’s no shortage of those in this genre – on the other hand, there aren’t many games that do what this game excels at.

In many ways, it’s really smart to shoot for something other than being a tightly-honed survival challenge, to glimpse at a different side of STGs all about pure shock and awe – GRAND CROSS: ReNOVATION doesn’t just shoot for that, it fires a 10,000DPS piercing laser so powerful it has an little on-screen logo while in usage.