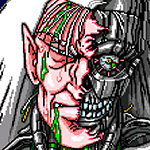 Quite a pleasant, if simple and breezy, run-and-gun – a workmanlike entry in the tradition of Ikari Warriors and company about being a little army dude from an overhead perspective. A wee bit variety in the level design, including a particularly irritating level based around searching a large, samey-looking outdoor base for hostages that all need rescuing before you can proceed.

EXP system takes the place of a score, allowing the player to get promoted from “RANGER” to “CORPORAL” to “GENERAL”, and further yet to the lofty ranks of “FULLARMOR GUY”, “MAD THUNDER” and finally “SUPER HERO”. May seem silly, but these are based on the actual US Army ranks awarded to soldiers who can rack up one hundred, two hundred and three hundred headshots respectively.

You’re constantly fighting with the usual retro game “fire rate limited by bullets on screen” mechanic. The later, more powerful weapons have a spread so wide that you’re constantly coming up against this, which oddly enough has a way of keeping the weaker weapons relevant here and there. But, most of the bosses can be point-blanked and generated right quick. A tip: Forget the last weapon you unlock, the “Hyper Missile Launcher” – absolute garbage. You will run out of time trying to take on later bosses with it, thing simply doesn’t dish out the required sauce.