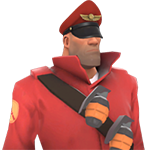 The good times stopped when they added the Loadout button, folks.

A game that was once defined by simplicity and elegance in design slowly over time morphed into a game where every class can do everything it wants (and certainly a lot of stuff it shouldn’t want). Now, the very fundamentals that kept the game moving – taking down a sentry nest, for example – seem rather lost. The demoman is off swinging a sword around, the soldier is off playing something called “trolldier”, the medic is being one-shot in 10 new and exciting ways and/or wielding an ubercharge that does everything except help bust a sentry.

I’m not going to argue too hard for something like the old balance over the current balance – not everything is a mere problem of balance/nerfs/buffs, and I haven’t properly played in so long that the current meta is pretty unknowable to me anyway. But this was the first multiplayer game to really burn me by morphing into something unrecognisable, and the wound is still yet tender. Though, even if you enjoy playing a game with all this junk – Valve’s revealed design ethos of “everything in the game should be picked equally” doesn’t allow many of their worse ideas to simply be silly niches, instead demanding that they rule the game just as much as the bread-and-butter options – often in conflict with the game’s original design aims of legibility, interaction and motion.

The Pyro has a jetpack1 now. Indeed, even a jetpackless pyro is the poster child for this mentality. This class used to be a somewhat niche ambusher class, though underestimate 175HP, a well-aimed shotgun and even a lick of fire damage at your peril – this was so thoroughly unacceptable that it was given the airblast, which instantly broke so many rules of the initial design. The ambusher class no longer has to stick to close-quarters. Players are randomly punished with mini-crits for having the gall to be on the same team as an explosives class – no sane Medic player goes within 16 feet of a Soldier if they can help it. Mobility is easily, cheaply and repeatedly stolen away. Ubercharges, the core mechanic of the game intended to break defense and keep a match moving, are suddenly and abruptly countered. Apparently, anything is worth a slight uptick in pick rates. Look hard enough and you see this design – classes getting things that take away from the weaknesses that should define them – is all over the game. Everyone has everything they could ever want.

Bot problem aside (playable vanilla community servers do still exist), people say the big crisis that faces this game now is a lack of updates?