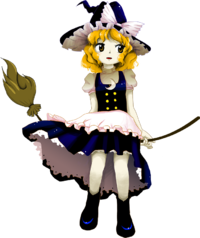 One eternal strength of the Touhou Project is its playfulness with mechanics. Most of the mainline games bring a new gimmick to the table, and many of the side-story games lean even harder into practically subgenre-creating mechanics – Shoot the Bullet, Great Fairy Wars.

Unconnected Marketeers too brings a new idea to the series – the ability to purchase and equip upgrades each run from a randomly-populated between-stages shop. Upgrades come in three forms – simple boosts to resources, passives, and active abilities – and are a pretty well rounded-out and diverse set. Unfortunately – rather than making the game feel fresh, this mechanic makes the game feel like a whole lot of other games out there.

It was my hope that the upgrade selection might be fixed, or perhaps seeded based on character, but it’s seemingly completely random. So, your build is not under your control at all. Suddenly you find yourself playing a vertically-scrolling roguelite. Suddenly you find yourself in that all-too-familiar situation of “waiting for the run where you get to pick the stuff you like”. And for all the hay made about the virtues of improvisation, or how boring it would be to just always use the strongest stuff, I’m left mentally begging, pleading, for literally any other method at all of bringing variety to a run-based videogame.

This system also causes big problems for the balancing – with plenty of ways to boost your attack power, the player’s DPS has never been so variable. So, even the rank-and-file popcorn enemies have to be made unpleasantly tanky to compensate – and the unusually punishing power level system doesn’t exactly help. It’s a perfect example of how upgrade systems are a dangerous idea in this genre – when the player can’t control their pace through a stage, having even just a little bit too much or too little damage easily compounds, resulting in dead air or impossible situations respectively. This is why classical powerup systems in the best-regarded STGs often do rather little to directly increase DPS – instead focusing on broadening the shot range, giving the player (literal) options and/or upgrading the effects a bit.

ZUN has created and helped with more than enough wonderful games at this point to earn the right to try whatever takes his fancy. And these games are never ever charmless – he continues to be an incredible musician, there are always fun spellcards to take on, and the core conceit of “isn’t it just grand when magical girls do stuff” is an eternal winner. But I still reserve the right to think some concepts are inherently a bit harmful, so it’s a good thing that this rare miss of an idea will likely go the way of Pointdevice Mode.